Since the mid1990s, Linux has been in the market but now has become the most widely used operating system in the world. Nowadays, you can find Linux on your smartphones, computers, servers, cars, home appliances and pretty much everything. To make your product, you should have knowledge of basic Linux commands. This blog post will come up with the best commands which you can go for:

Linux has become one of the most popular platforms on the planet. It is mostly used in servers, and more than 90% of the internet, is powered by Linux servers. It is open-source software, making it possible for anyone to make changes to the code and redistribute it under a different name. Some of the most famous Linux-based operating systems are:

Linux is everywhere! The chances of you coming across a Linux interface are very high. A fun fact is that it is a mostly used operating system without a GUI (graphical user interface), which results in some complications for beginners.

Before starting our journey, we need to familiarise ourselves with the terminal or shell.

What is Linux Shell? 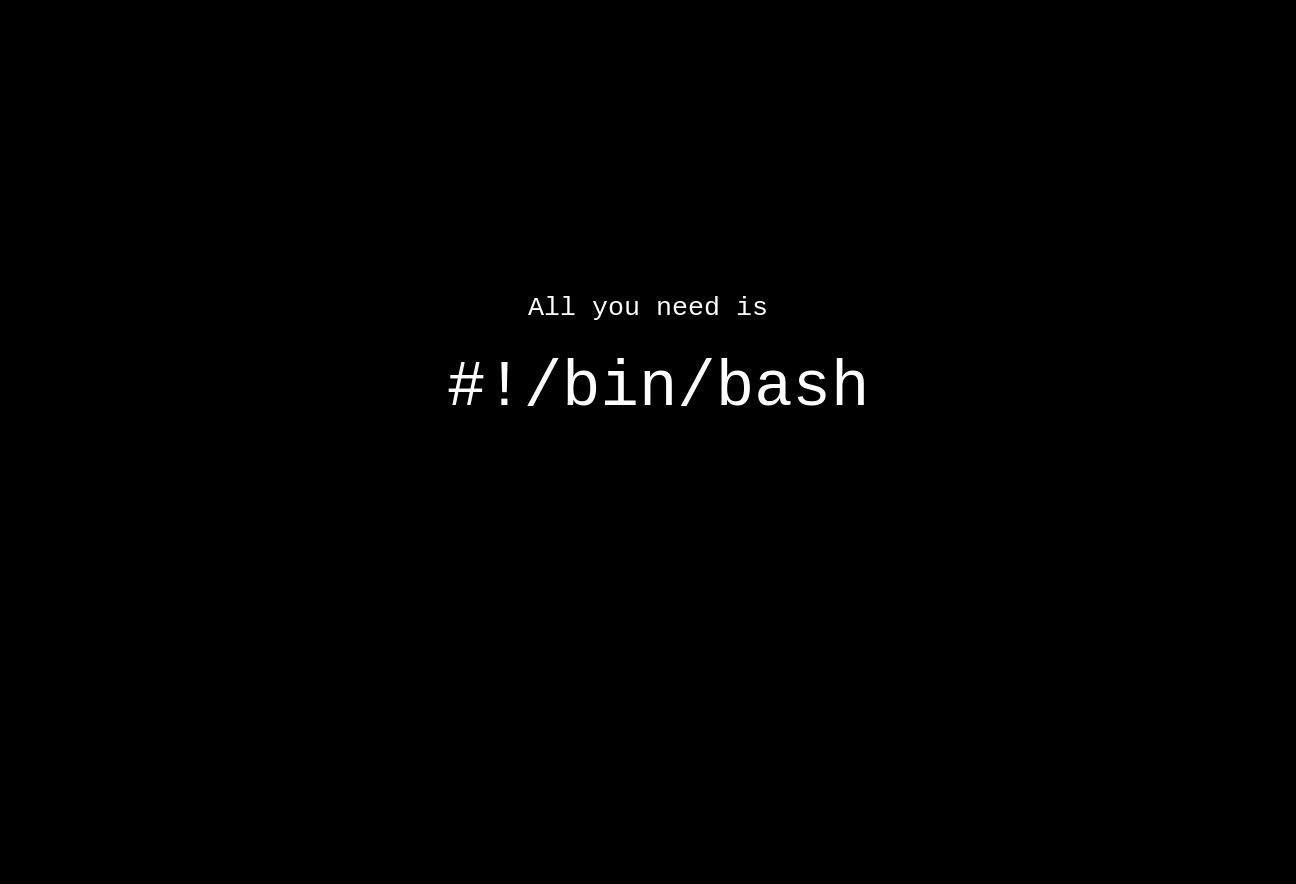 In short, the user enters commands to the system, and the system will show the output as a result. Most Linux distributions come with a CLI (Command-line interface), and you use the terminal/shell to input the commands.

Linux distros come with a GUI, but this tutorial is solely dedicated to beginners who want to familiarize themselves with the Linux command line.

Now let’s open the terminal and get started with the commands.

Note that the Linux shell is case-sensitive, so you should be careful when entering commands.

However, we researched and compiled a list of basic Linux commands that will get you to master the Linux environment. We have separated it according to the level of experience you have:

The PWD command will show you the current working directory (also known as a folder) you are working on. It will show the absolute path with all the directories.

Here's an example: when you type in the pwd command while inside a folder called folder1, the result will be as follows:

The ls command is used to show all the content inside a directory. The default settings will show the contents of the current directory.

If you want to see the content in other folders, you should type the folder path after the ls command.

For example, you should enter the file's absolute path after the ls command to view the files inside the books folder.

The ls command has many variations:

The cd command is used to navigate between files and folders. You will need to type the full path or the directory's name (depending on your current directory).

There are some shortcuts to help you navigate quickly:

An example of the cd command will be:

You can use the mkdir command to create new directories. For example, To make a directory called pictures, you can type mkdir pictures.

Here are some tips on how to use the mkdir command: 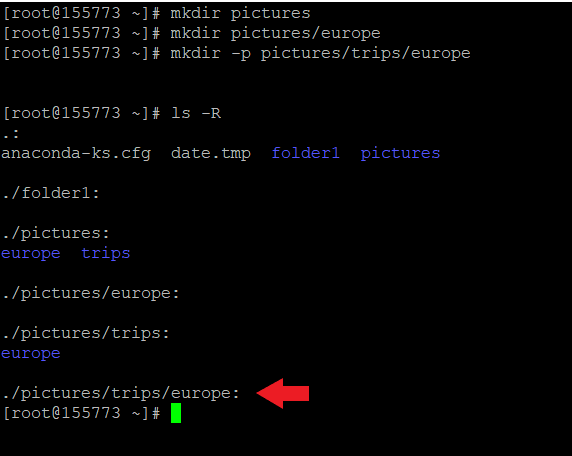 If you need to delete a directory, use the rmdir command. However, rmdir only allows you to delete empty directories.

Here's an example. Let's say that in folder1, there is a text file named test.txt. To remove this file from folder1, enter:

The touch command is used to create empty files directly from the command line. For example, the following command will create a new text file with the name 'docnew'.

You can also create files in a different location by specifying the path which will generate an HTML file under the docs directory.

The mv command has two functions:

Here's are two examples (check the screenshot if it is not so clear):

To move a file, you can type the command as shown in the example, and you should set the name of the file that needs to be moved and the path.

To rename files, you can use the below command. The name of the file will be changed to file5.txt.

Enter the text inside the editor and exit to save the file. 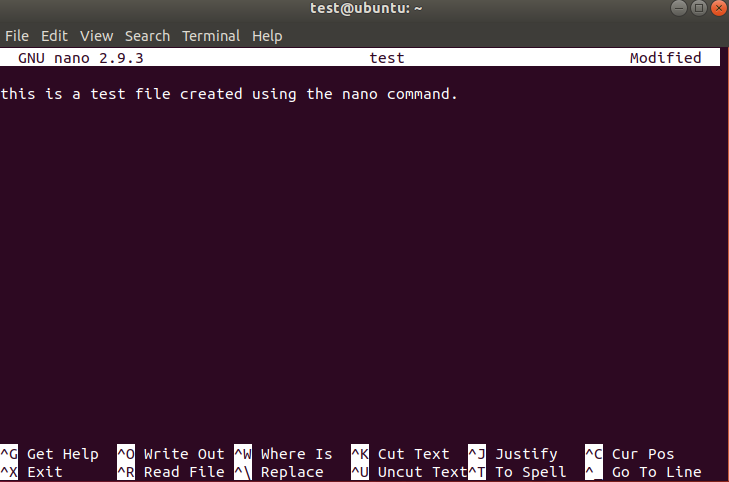 The sudo command will let you perform tasks that require root privileges. However, it is not advised to use this command for daily usage because it will be hard to make it right if an error is made.

Once you start using the Linux working environment daily, you will soon notice that you can run 100s of different commands every day. To know about all the Linux terminal commands that you have entered, you can enter history command to review all the commands you've entered.

You can use apt to work with packages in the Linux command line. Apt-get is used to install packages and requires root privileges. You can use the Sudo command with it. Here are some examples of using the apt-get command.

CAT (short for concatenate) is one of Linux's most frequently used commands. This is used to list the contents of a file on the standard output.

For example, this command will open the file and display the contents.

Here are other ways to use the cat command:

The cp command is used to copy files between two places through the use of the command line. The command takes two arguments; the first is the file's location that needs to be copied, and the second is the destination of the file where the file should be copied. Here's an example.

There is a file named my.txt in the current directory. You want to move this file to a folder called personal. Type this command

Note the spaces used in the command.

No matter command, with the man command, you can know everything about each of them. 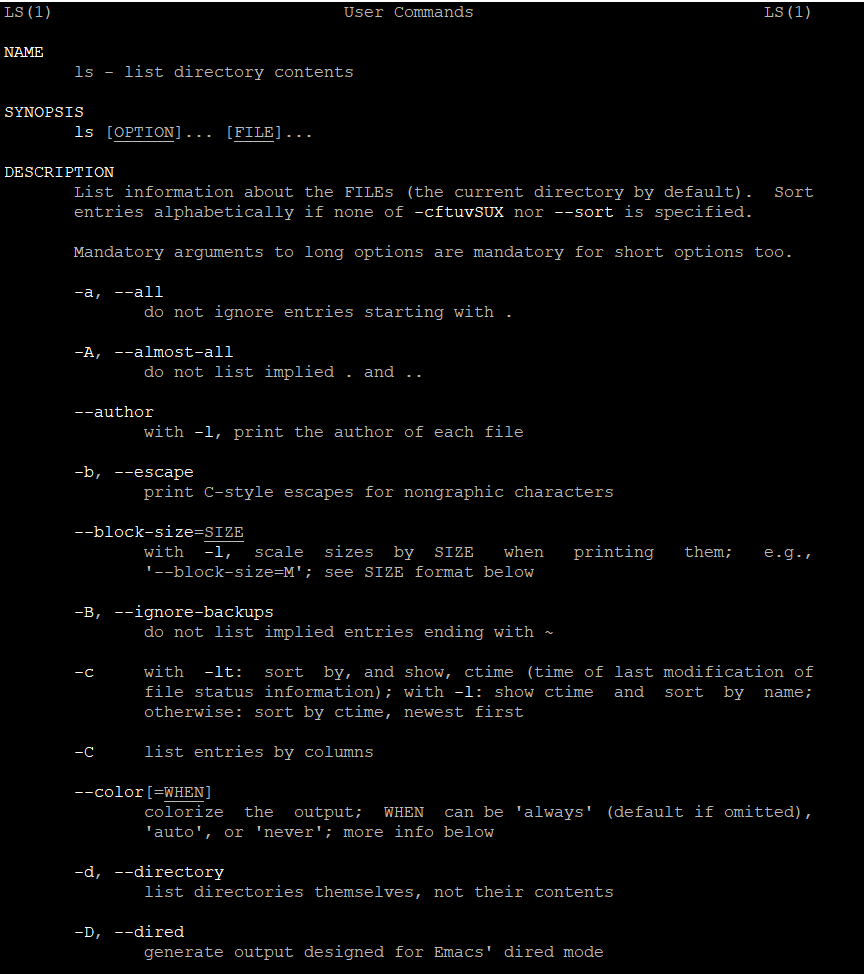 Here's an example which will display a help message with one-line explanations. 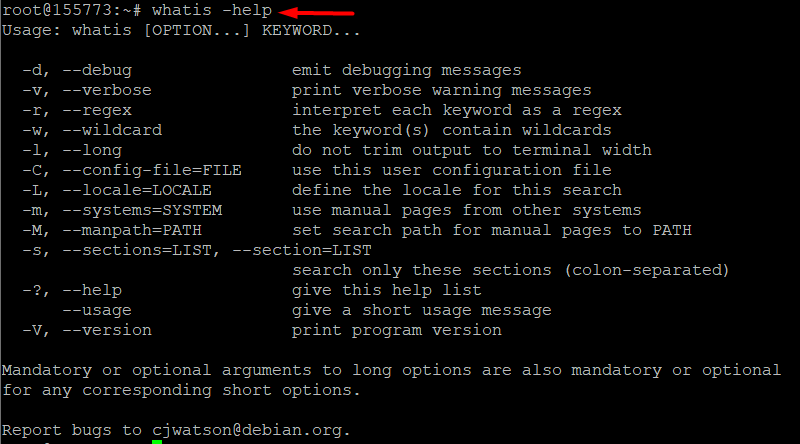 The echo command is used to move data into a file. A simple example of how this command works will be as follows. Imagine you wish to move the text "I like the Linux command line" into a file called interests.txt; then, the corresponding command will be:

The diff command compares the content of two files line by line. This is useful when you need to make program alterations instead of writing the entire code again.

An example would be:

The jobs command will display all currently running jobs along with their status. A job is a process that is started by the shell.

Like in Windows, when we encounter an unresponsive program, we end the task from the taskbar. You can terminate these kinds of programs from Linux using the kill command.

There's quite a range of using the kill command, which can be checked using the below command.

Even though there is a list of 64 different commands, the most common ones are SIGTERM (15) and SIGKILL (9).

Knowing the kill command is not enough to terminate the process without the PID number (process identification number). To find out the PID, run the command:

An example of terminating a process will look like this:

If you want to download something from the internet, you can do that using the Linux command line. Use the wget command followed by the download link.

An example is shown below, where I downloaded the content of 1gbits.com, which will be saved as an HTML file.

Like in windows, you can use the ping command to check the connectivity status to a server/internet. Here's an example where we checked if our system can connect to 1gbits.com and the response time. Note that the pinging will not stop automatically, so simply use ctrl+z to cancel. 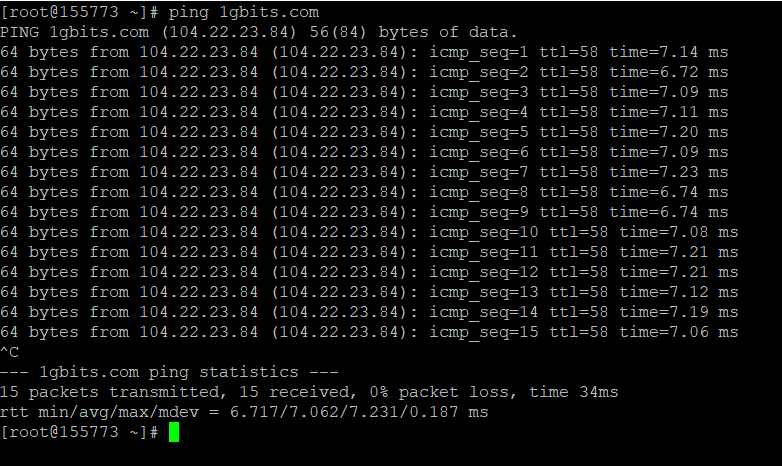 The whereis command in Linux is used to locate a command's binary, source, and manual page files. This command will search for files in the restricted set of locations (man page directories, binary file directories, library directories). The most common usage of this command is to find the executable files of a program, configuration files and the man pages.

The syntax is fairly simple: you type whereis followed by the name of the program.

For example, whereis netstat will show the netstat executable and the location of the man page.

To use the service command is not complicated at all. Let me give some simple examples (you will need root privileges):

The command alias creates 'aliases' for your most commonly used commands. Aliases are like custom-made shortcuts to represent a command.

To view all the default sets of aliases, enter:

To create a temporary alias, enter the name you wish to use followed by a '=' sign and quote the command you wish to alias.

The syntax is as follows:

An example of using an alias is as follows:

The most common options for using the df command are as follows:

Here's an example of using the df command to display all file system information: 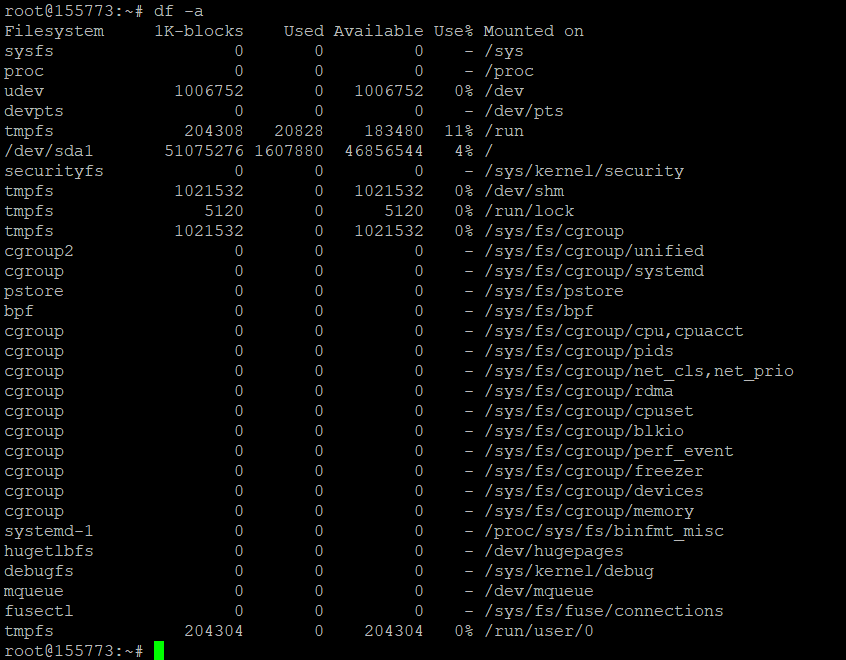 When using the LPR command, you can use the following options:

CMP command in Linux/UNIX is used to compare two files. It will compare byte by byte and will help you to find out whether the two files are identical or not.

When it comes to the Linux infrastructure, all files are owned by a specific user. In the complete list of Linux commands, the chown command enables you to change or transfer a file's ownership to a particular user.

Here's an example. Imagine a user named john, and the root user wants to provide the ownership of the file data.txt to john. The command will be as follows:

The ownership of the file will be under the user john.

Like the Windows task manager, the top command will display a list of running processes and how much CPU each process uses. This is very useful for monitoring system resource usage. 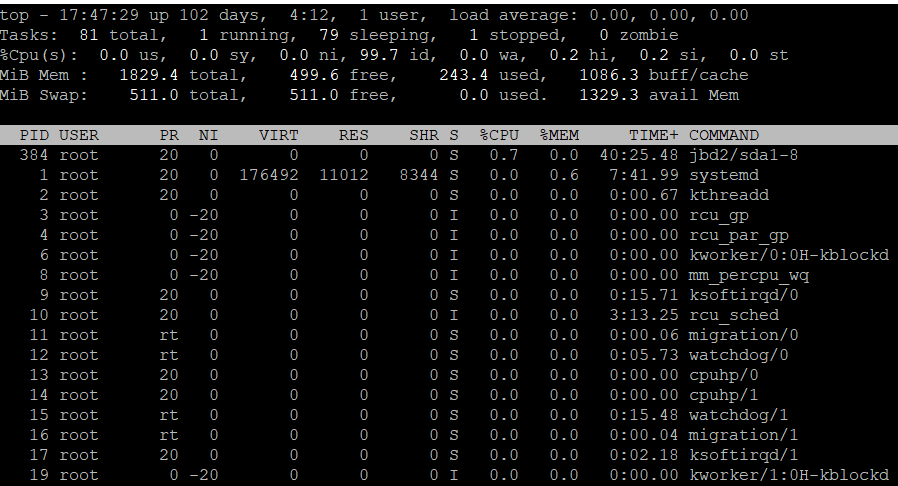 Linux is a multi-user system, which means that more than one user can use the same system simultaneously. To show how to add a user, follow the screenshots that are shown below.

Adding a user max can be done by entering:

To check if the user is added, you can enter the following: 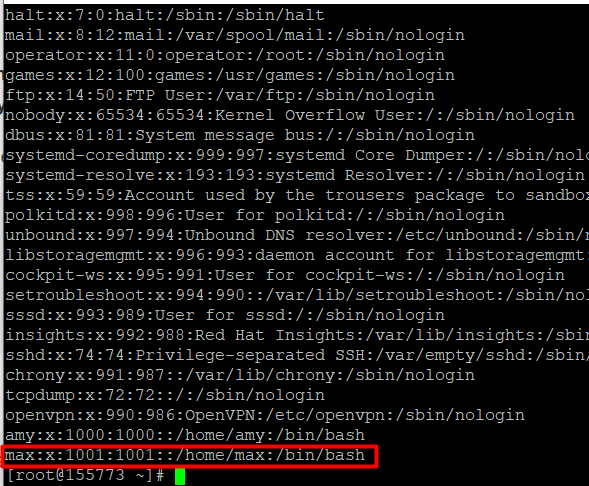 The user is created. Now to delete the user max, we can use the command:

Once deleted, check the list of users; you will no longer see the user max.

The grep command is used to search for all the text in a given file. For example, the following command will search for the word "dummy" in the notepad file. Lines that contain the searched word will be displayed and highlighted.

The head command will make your life much easier when going through documents. This command is used to view the first lines of any text file. By default, it will show the first ten lines of text.

This one has a similar function to the head command, but instead of showing the first lines, the tail command will display the last ten lines of a text file.

GCC stands for GNU Compiler Collections, which compiles mainly C and C++ language. It can also be used to compile Objective C and Objective C++.

Syntax of GCC command is

Let's go through an example of using the GCC command.

This will compile the source.c file and give the output file as a.out file, which is the default name of the output file given by the GCC compiler, which can be executed using ./a.out

There are many more best Linux commands that are out there, but we believe that with this basic Linux command list, you can start getting familiar with the world of Linux. Here are some tips you can follow:

If you feel that some more commands should be added to this list, you can let us know through the comment section below.