If you are a Linux user, you must have used terminal commands for various files and directory actions. One of the commonly used commands is to rename file Linux. It is an add-on for advanced terminal actions if you have administrative rights to the Linux terminal.

There are many types of commands that you can use to do this, like Linux mv or rename. However, the mv command is now out of date, and the Linux rename command is getting popular. Apart from the command-line interface, Linux also offers the powerful CLI (Command Line Interface) that gives you various renaming commands.

To leverage Linux's power, you should have a strong knowledge of the Linux commands and how the files and directories work in Linux. Also, renaming a file, folder, or directory will impact the Linux hierarchy's directory chain.

This article will show you how to rename files in a Linux terminal with various commands from the command-line prompt, whether you are an experienced Linux user or a beginner.

The mv command allows you to move files from one source location to a destination. Moving a file means that you can send a file from directory A to directory B.

The other usage of the mv command is to rename file Linux. While that is true, usually, the mv command ends up doing both at the same time. It means that you can move an existing file to a new file location by defining it with a new name.

The mv command's designated job is not to rename the file but ends up doing it. This widespread command is available for all Linux distributions and Unix-like operating systems.

Though there is nothing wrong with using the mv command, many administrators do not find it suitable for the purpose.

The above command will show the below details- 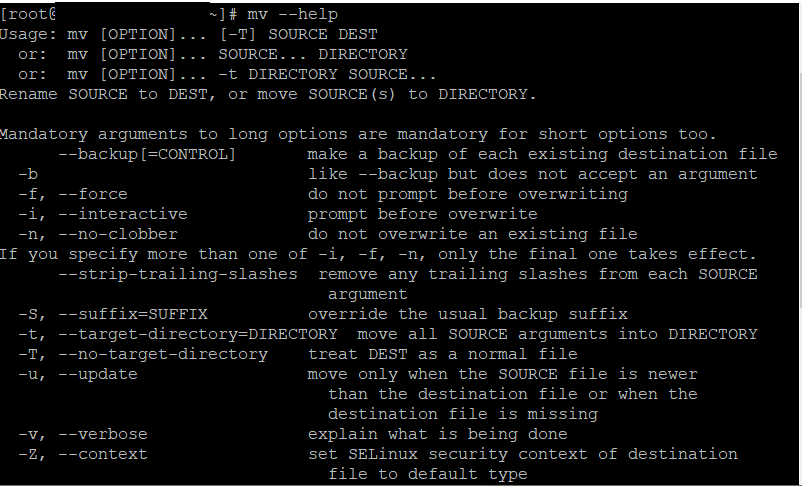 Below are the parameters for the command:

You have to follow some rules while renaming any file:

Process for renaming a single file with the mv command

Use the following command to move or rename the file using the below syntax. A help command for mv will provide syntax and different options.

You have to type mv following the old file name and the new file name on the command-line interface. This process is the same for all Linux and Unix distributions.

With the below command, we will check the list of the existing files in a directory.

Now we will check if the above command has worked by using the ls command. If copy-paste does not work, type the command directly!

Yes, the result shows that all the files with the .prog extension have changed to the .prg extension within the directory. Now we will analyze what the above bash code did.

This method seems to be a bit difficult, especially for a beginner. But yes, It comes with a more straightforward way to rename multiple files in Linux using a different command. Let's discuss the rename command, which made this task simple.

Rename command is widespread whenever it comes to renaming single or multiple files. It provides an easy way to do it, which is not possible with the mv command. However, you should have a good knowledge of using regular expressions. You can install the right version of the rename command per your distribution package manager's requirement. Here's how to set it up on your system:

Perlexpr is the given expression according to which you will rename the file.

We will now rename all the .prog extension files.

Let us see what the rename command has done.

Here we will see how to change the other part of the file name rather than its extension. Suppose we have a directory with several files having prefixes such as "slang_."

We want to change the slang_ to sl_. We will see how the below command will work.

Replaces all the files starting with slang_ with sl_.

This process will also work in the same manner as the above rename commands. But this time, we will replace the part of the file with nothing to make it delete.

The result will be as shown below:

It has deleted the sl_ part from each file name.

How to Search with a regular expression?

This is a different case that can be easily implemented with the rename command. Suppose you have two or more files with similar strings in the filename but not the same. In that case, the simple substitution method will not work. We have to work on the regular expression to get the desired output.

Now you can see the result of how changing the regular expression has worked.

How to do Translations with Rename Command?

The rename command will allow you to perform translations on the filename. Here we use "y" in place of "s" to specify that we are not doing substitution but translation.

This article provides you with a complete insight into how the MV command (rename file Linux) works in Linux and other distributions. Also, where the mv command is difficult to use and implement for specific cases, the rename command comes to overcome the mv command's difficulty in renaming multiple files in Linux. We have described many instances with different command syntax where you can use the rename command Linux. You can comment in the below-given section if you have any more suggestions.

How To Get A VPN?

How to use a VPN