When working with Linux systems, you will come across the need to create or edit text files. The most popular command-line editors are Vim and Emacs, but they have a steep learning curve. For an easy-to-use, simple text editor, Nano is the way to go.

GNU nano is a command-line text editor made for Unix and Linux operating systems, including all the basic functionalities of a regular text editor. You have the ability for syntax highlighting, editing text, multiple buffers, search and replace, spell checking and more.

It has a simple and easy-to-use interface, and throughout this tutorial, we will cover all the basics (and a bit more) of using the nano text editor.

In this tutorial, we will be using screenshots taken from Ubuntu 20.04.

How to install Nano?

We will start the guide by installing and setting up Nano on your Linux system. In most cases, the Nano-text editor is pre-installed on macOS and most Linux distros. You can check it by entering:

If you don’t have Nano installed on your system, you can install it using the following commands.

How to use nano

Once Nano is installed, you can test it by entering the following command: 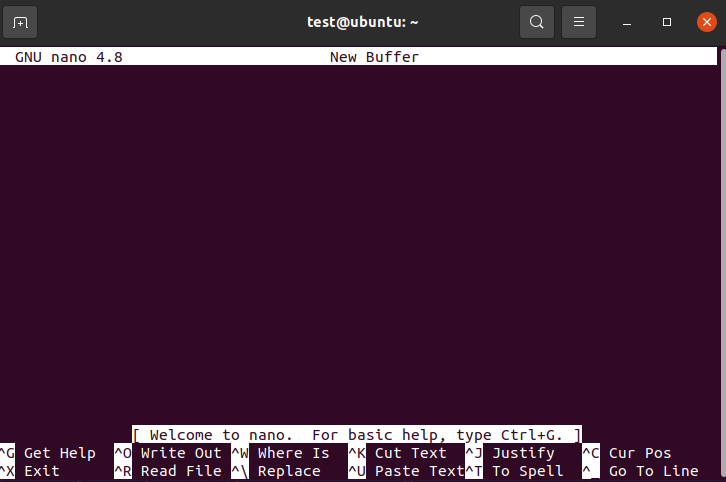 You will see a window similar to the one seen above.

All commands are prefixed with either ^ or M character. The ^ represents the Ctrl key, and M represents the Alt key. To display the complete list of commands, you can press Ctrl + g.

How to create a text file?

To create a text file using the nano command, enter the following (Note that instead of filename, enter the name of your file):

You can enter all the text you need immediately in the window. Once you have finished the document or if you have edited the document, save it and exit the editor.

How to save the text file?

There are two ways to save the text file.

To save the file’s current workings, you can press Ctrl + O. Nano will ask for the file’s name, so you can just hit enter. If you provide a name to the file, Nano will save a new file with the new name and the newly edited content. 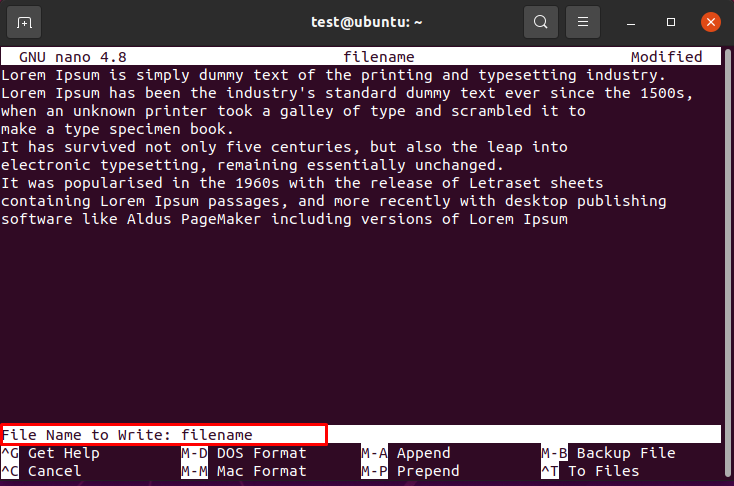 Once the file is saved, you will see a success message “[Wrote 9 lines]”. 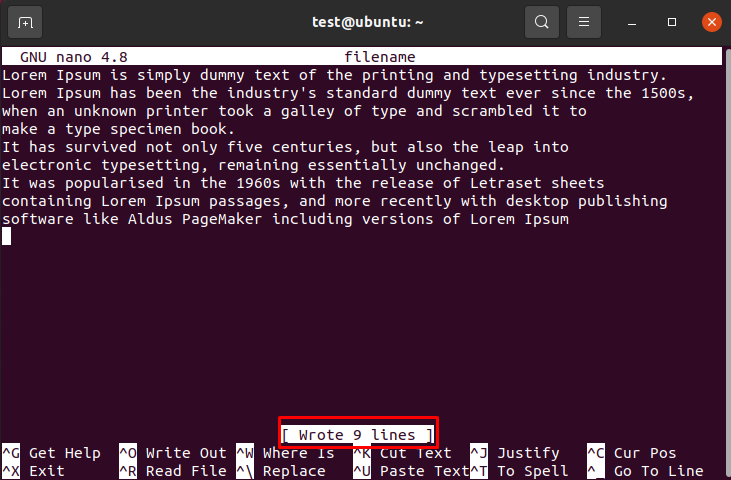 The second way to save the file is by exiting the file. Press Ctrl + x, and when prompted to save the modified content, press y and click enter. 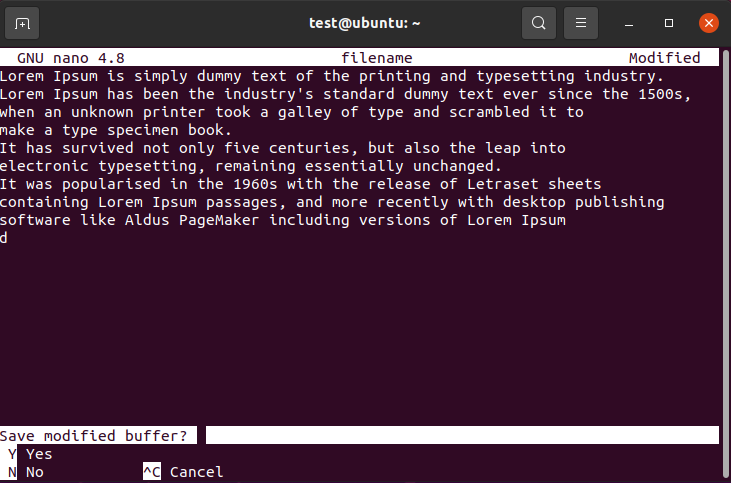 Moving around the text editor

You can use the Home, End, Page Up, Page Down, and the arrow keys to move around the file.

Instead of using the above-mentioned keys, you can use some of the key combinations that are mentioned below:

To edit an existing file, you can use the following commands.

Here’s an example where the editor is requested to put the cursor on the 3rd line, 15th character; 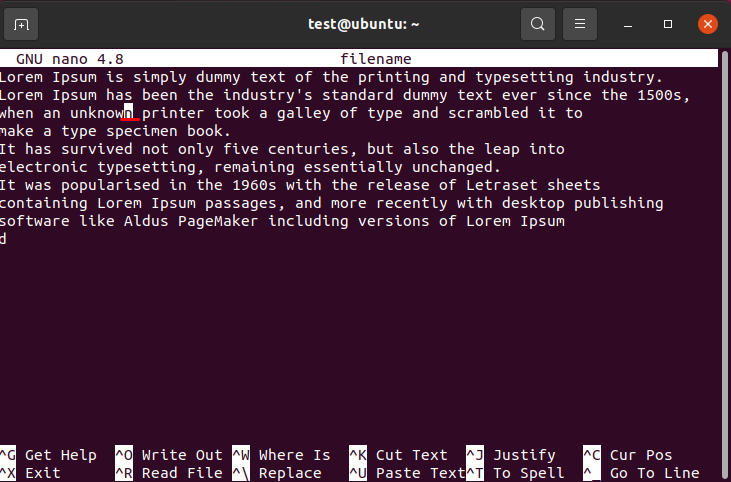 This is a common feature among most text editors, and Nano handles this in the simplest way possible. To search for a particular word inside the text editor, use the “where is” option by pressing Ctrl + w.

This will open a search prompt where you can type in the text you want. To move to the next result, press Alt + w.

To replace a word, you should first open the search bar using Ctrl + w and then press Ctrl + R. Enter the word you want to replace, then enter the word that should be replaced with it.

When making the replacements, you can make them for all the instances in the text or for specific ones by choosing them individually.

Here’s an example. I want to replace the word ‘dummy’ with ‘normal’ in all instances. Check the screenshots below: 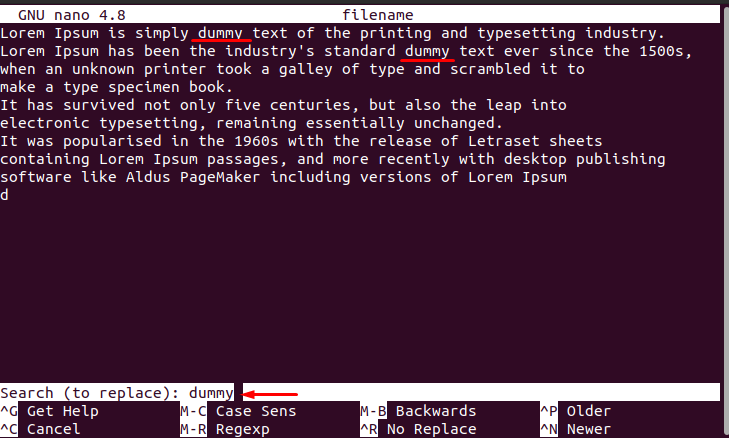 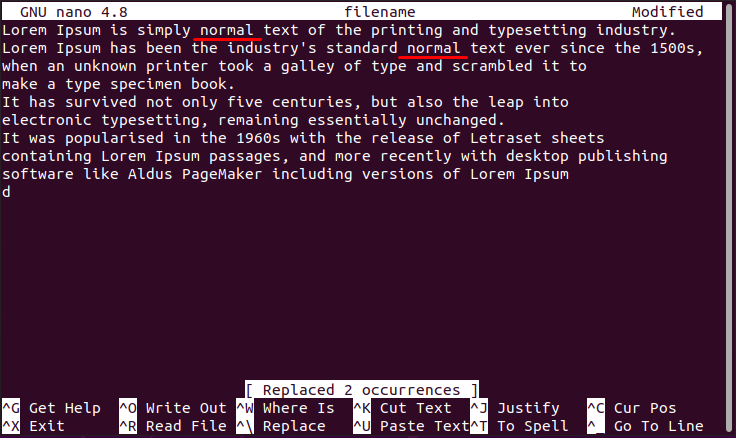 To learn more about other Linux Commands, Read more

Copy and paste in Nano

In Nano text editor, you can copy and paste content from one place to another. However, the keys for copying and pasting are different from the Windows shortcut.

You can use the Shift + arrow keys to select the text needed. In the Nano command line text editor, to copy a text, use Alt + 6 and paste the text using Ctrl + U. 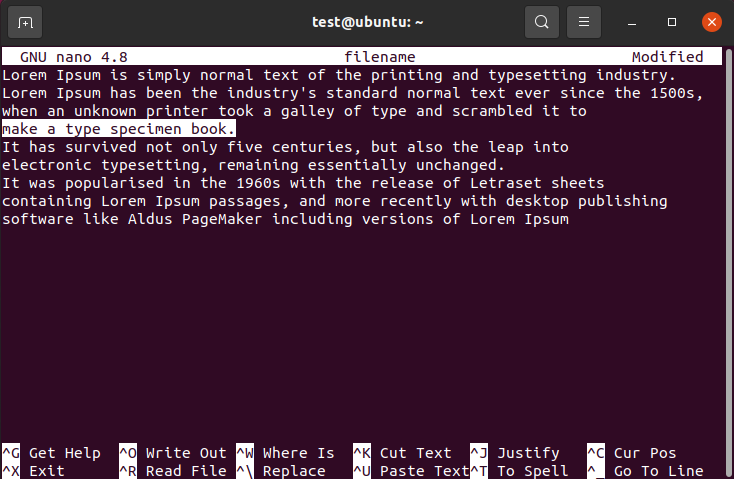 Instead of copying a piece of text, you can use Ctrl + K to cut it and to use the Ctrl + U command, you can paste it to the needed place. 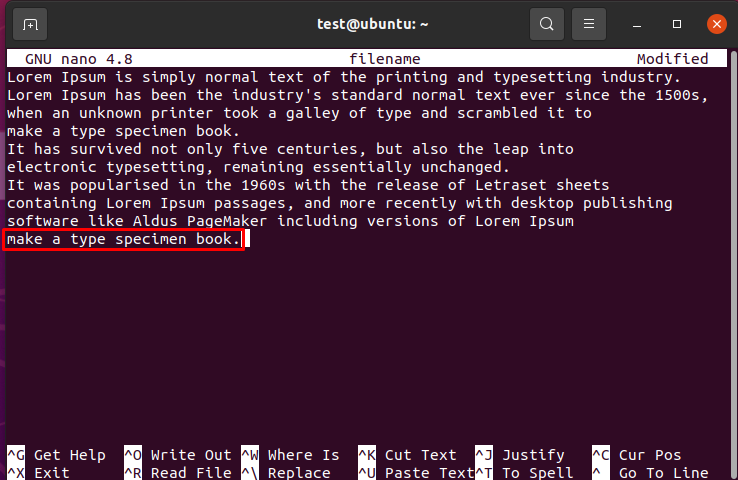 Did you delete a line by accident? Have you pasted the content in the wrong place? Here’s how you can undo an action and redo it. 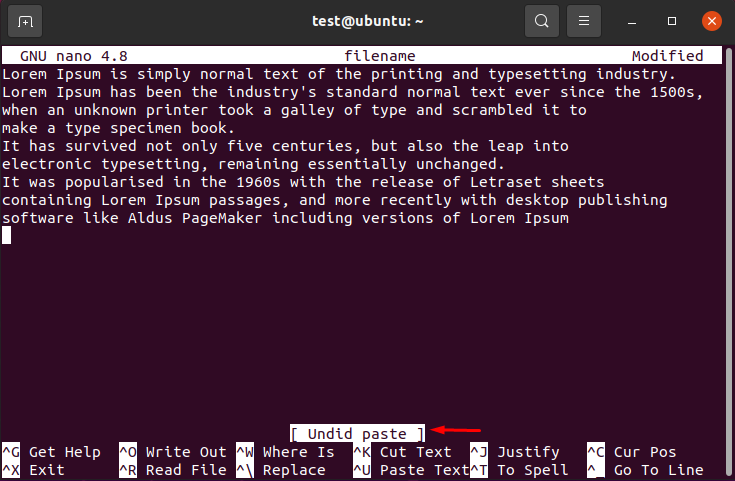 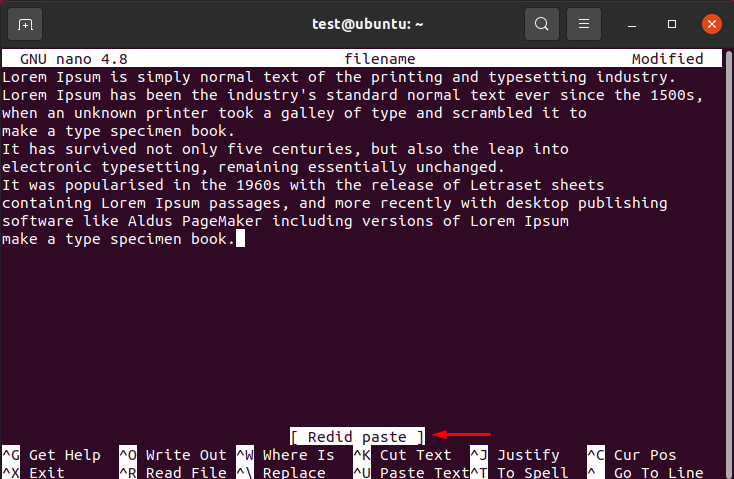 Once installed, you can spell-check by entering Ctrl + T inside the text editor. It will select the misspelt word and ask for the correct replacement.

Check the picture below: 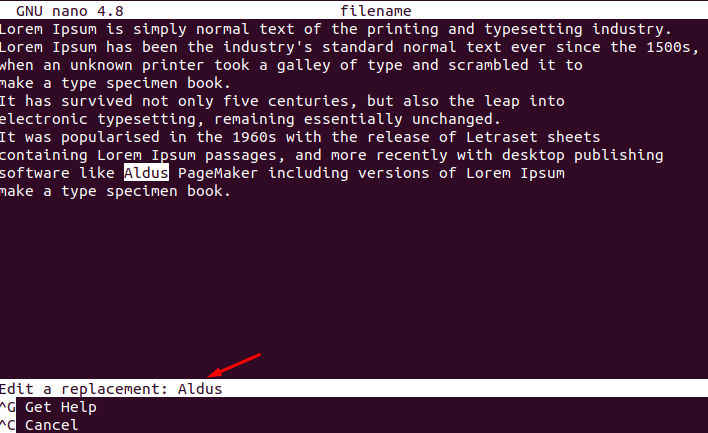 We have mentioned all the usages of the nano command line text editor. It is a popular text editor among most Linux users. The most basic use of nano text editor comes in 3 simple steps:

You can always use the Ctrl + G command to check for all the additional commands.