How do I Install dot NET Framework on Windows Server?

If you’re using a Windows server, you must have come across many applications that require the installation of the dot NET framework. An administrator needs to install this manually in their operating systems in various ways. The blog contains all the major procedures to install the .NET framework on different Windows versions, including two unique ways to install it on Windows Server 16 and later versions.

The latest and last version of the dot NET Framework is 4.8, and Microsoft will publish no new versions/revisions. However, it will continue to serve with monthly security updates and bug fixes. Also, it will come with Windows, and users will not be required to migrate their .NET Framework apps.

What is the dot NET Framework?

.NET is a software framework that Microsoft originally developed. Launched in the year 2002, it is a Virtual Machine that compiles and executes programs written in various languages like C#, VB.Net, etc.

This framework allows an individual to develop form-based/Web-based applications and build Web services. Moreover, users can build applications for Windows, phones, the web, etc., and come with many functionalities that meet industry standards. This robust framework supports 60+ programming languages, and 11 of them are developed by Microsoft.

It is a platform through which different applications are built with tools, libraries, and programming languages. You can execute dotNET code in different places like Linux, macOS, Windows, Android, etc.

It is used to develop Windows desktop and server-based applications.

Being open-source, it efficiently runs applications and console apps on Windows, Linux, and macOS.

The components of the .Net Framework architecture provide an environment to perform and integrate with various programming languages that help deploy and develop Windows desktop applications composed of class libraries and reusable components. It functions when an app runs.

First, the CLR (Common Language Runtime) grabs all the assemblies to help a just-in-time compiler (JIT) transform into a machine language. This code later gets executed on the particular architecture of the device. The infrastructure of the .Net framework is mentioned below: 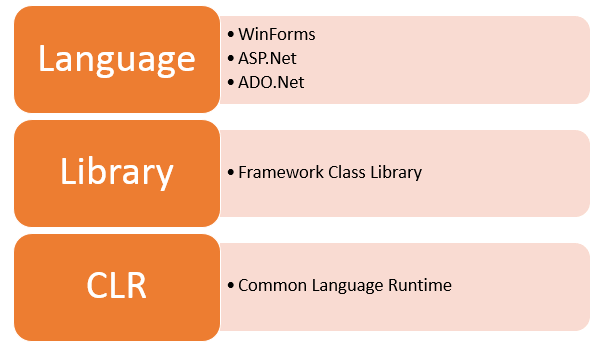 It is the platform on which all the .Net programs are performed. A few of the main features are mentioned below:

.NET framework comes with class libraries. These libraries are the collection of methods and functions used to perform their respective tasks. Majorly, these libraries are divided into either the System.* or Microsoft.* namespaces.

The applications that can be built using languages are grouped into the following:

It lets users go smoothly without hurdles. For instance, the applications built on the older versions of the .Net framework will also work on the machines working on the higher version of the dot net framework. It happens because Microsoft works a lot on the compatibility of old versions with the new ones.

All the applications built using the .Net framework are extremely portable and compatible with all of the Windows platforms. Moreover, Microsoft is also working to make these applications work on other platforms like iOS and Linux.

It manages the memory by taking care of all the resources not used by a running program. Therefore, it releases resources accordingly through a program called "Garbage Collector" that runs along with the .NET framework. It keeps on checking the system resources that are not in use within regular intervals and takes action as needed.

The .Net framework is also embedded with tools used as package applications for the .Net framework. These packages simplify the deployment process then distribute to client machines.

Installing the .NET framework on Windows

Only on the following Windows versions can install the .NET version:

It is required to have Windows Server installation media Before installing .NET Framework on your system. Also, mount the ISO file with the help of Windows Explorer by simply selecting the context menu of the ISO file:

Keep in mind that the user must have administrative privileges to perform these actions.

Download .NET framework 4.8 directly by clicking here. Else, if you want to install or to look for other versions, you can check out the complete list here.

First of all, open the Server Manager from the device you wish to install. Now, click on manage, then open “Add roles and features”, and select the installation type by selecting either Role-based or feature-based installation.

Specify the specific source path from the option available on the “confirm installation selections” screen. Right after selecting this, the installation process will get started.

Implement the below-mentioned command in PowerShell to check if the .NET framework is already installed or not:

Run the following command to initiate the installation process of the .NET framework:

After the successful execution of the previous command, you’ll receive the following output:

Being an original Microsoft product, the dot NET framework is used for developing form-based and web-based applications that are compatible to run on various platforms. The blog contains detailed information regarding what the .NET framework is and its major components.

Learn about its installation process step-by-step with all the required information not to get perplexed while performing the same.