What is Remote Desktop Protocol

Users can access the distant Windows PC or laptop over the internet or the local network using the Windows Remote Desktop Connection feature and utilize all the installed tools and applications on the network. This is achievable using the Microsoft Remote Desktop Protocol, or RDP.

RDP can connect any Windows PC or server to another Windows device. However, only specific versions of Windows support RDP connections. This proprietary protocol competes with the open-source VNC protocol, which is widely used on Linux and other systems.

Microsoft's Remote Desktop Protocol (RDP) is a secured communications protocol. It allows network administrators to troubleshoot problems that particular users are having remotely and provide users with remote access to their actual workstation PCs. Employees who work from home or on the road and need access to their work computers, as well as administrators who do system maintenance, are examples of remote desktop services.

RDP is an extension of the T.128 application sharing protocol developed by the International Telecommunication Union-Telecommunication (ITU-T). A user or administrator must use RDP client software to connect to a distant Windows PC or server that is running RDP server software in order to use a remote desktop session.

A graphical user interface allows a distant user or administrator to access apps and modify files in the same way they would if they were sitting in front of their computer. Most versions of Windows, as well as macOS, Linux, Unix, Android, and iOS, include RD clients. There is also an open-source version.

On Windows, how do I activate Remote Desktop connections?

You must first activate RDP on the remote server or PC before you can use it to connect to another Windows PC or server. Fortunately, setting Windows to enable Microsoft Remote Desktop is a relatively simple procedure. 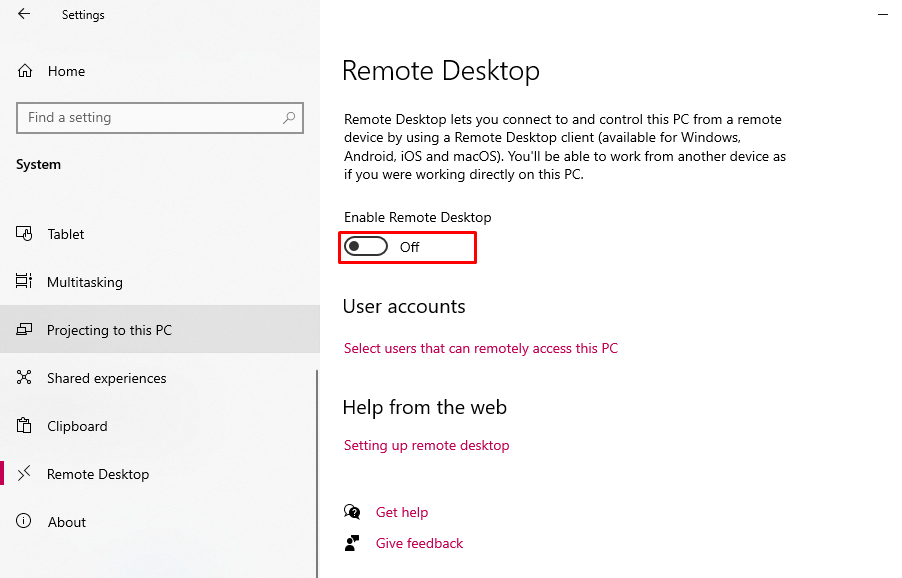 By default, the Microsoft account you use to log in will also be used to log in to your PC remotely. Select users who can remotely access this PC to allow more users to connect. Press Add and look for the user account in the Remote Desktop Users box.

You need to authorize input and output connectivity to TCP/UDP port 3389 on your network if port forwarding is not set to enable RDP sessions on the Web.

Consider a toy vehicle or a remote-controlled aircraft. The user clicks buttons and directs the aircraft or automobile from a distance, and their orders are sent to the vehicle. RDP works similarly: the user's mouse and keystrokes are remotely sent to their desktop computer, but through the Internet rather than radio waves. The user's desktop appears on the computer from which they are connected as if they were sitting in front of it.

The RDP protocol creates a network operating channel for data transfer between the remote desktop and the machine that is presently in use. Mouse movements, keystrokes, the desktop display, and any other important data are delivered over this channel using TCP/IP protocol, the transport protocol used for most types of Internet traffic.

Slight delays are expected because keyboard and mouse action must be encrypted and transferred over the Internet, which takes a few moments, and the desktop display must be delivered back to the user. For example, suppose a user double-clicks on an application to launch it.

In that case, the "double click" may take a few moments to complete since the user's action is communicated to the desktop before being carried out. Then, there may be a brief pause when the program launches as the user's display is sent.

It's critical to observe RDP best practices, such as avoiding using open RDP connections over the internet or providing anybody direct access to an RDP server when using Windows remote desktop.

Defense-in-depth, which employs several levels of protection, and the concept of least privilege, which restricts user access to just the absolutely critical systems, are two more safeguards.

RDP has historically been vulnerable to hash attacks and computer worms. Brute force assaults have been used to obtain access to prior and current versions of RDP, albeit they are less effective.

Microsoft released security updates for previous versions of Windows, and later RDP versions are considerably safer. More latest Windows operating systems have a way of defining which users are permitted to connect to the system through Remote Desktop Connection Windows 10. There's also the option of preventing remote access to the machine unless network-level authentication is used.

Overall, RDP may be a valuable tool for managing and accessing remote work, especially for organizations with an on-premises IT infrastructure.

What are the most effective RDP alternatives?

RDP connections, as previously stated, often need a Windows component, and while third-party RDP servers such as xrdp exist for platforms such as Linux, they are generally inferior to other remote connection technologies such as VNC.

Alternative free and commercial remote desktop solutions employ different protocols to see and operate a remote PC or server. On all main platforms, here is a list of some of the finest alternative tools for remote connections:

Hence we learned what Remote Desktop Protocol is and how we can easily use it to access any device remotely. We also saw the different vulnerabilities presently in use and the benefits and disadvantages of RDP connections.