How to install Git and Upgrade Git?

This tutorial will show you how to install git and update git. Version control like Git comes into play to help developers save the history of changes implemented. They allow developers to look back to previous versions of code and learn how the last changes helped contributors change projects over time.

Being one of the most used open-source version control, Git was created in 2005 by developers who also contributed to the Linux operating system.

What is Version Control?

Also known as source control, version control helps manage and track the software code changes over time. After every edit made, the version automatically takes the snapshot of the files and saves them permanently. This snapshot can be recalled in the future for references and to track the contributions to help software teams work faster and smarter.

Version controls make the proper sequence without interrupting other members’ work to eliminate the incompatibility issues of different developers making changes simultaneously. Moreover, the feature of branching and merging allows developers the ability to work on independent streams.

Codes kept inside Git continue to change with the addition of more code. Additionally, numerous designers can add code in parallel. So Version Control System helps deal with this by keeping a background marked by what changes have occurred.

Git offers a remote repository stored in a local repository that will also be stored in each developer’s computer. The code is not restricted to the central server; a copy is distributed to all the developers.

Because Git enables code on every developers’ computer, it is classified as Distributed Version Control System.

It is the most popular open-source version control system. Developed in 2005, Git is a distributed version control system developed by the same person who played a major role in developing Linux operating system. With great flexibility, Git has emerged as a go-to choice for any team and developers.

Also, its community offers tons of resources from trained developers to help new users at various pain points and loopholes. Nowadays, every development environment supports Git, and its command-line tools run on every popular operating system.

Moreover, it makes the collaboration among the members easier and allows modifications from multiple people to get merged at one source. It also results in working offline or remotely without any hurdles. An individual can work locally without syncing the copy of the repository with the server’s copy.

The Three States of Git

Git has the following three major states in which files are kept: 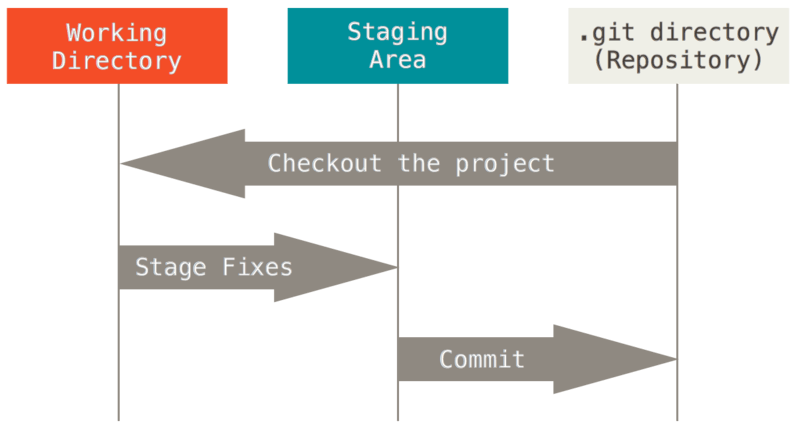 Every developer has their local copy of code to work in parallel within their branches without interruption. And because all the operations are local, developers can also access offline.

Because of its prominence, Git allows integration with most tools and items. Each major IDE has underlying Git uphold and numerous instruments that permit you to oversee ceaseless mix, consistent organization, mechanized testing, measurements, and highlight reconciliation with Git. This reconciliation improves your everyday work process.

Security of the source code is the primary concern of Git. Contents and records documents and registries, forms, labels, and submits in SHA1, a cryptographically secure hashing calculation. SHA1 secures the code and the change history against both coincidental and malignant change and guarantees that the set of experiences is entirely discernible.

Git is flexible in a few regards: helping for different sorts of nonlinear improvement work processes and productivity in both little and huge activities. And its similarity with many existing frameworks and protocols.

Branches in Git enable flexible and simultaneous development. It offers stable and high-quality code through which helps in implementing fast releases. Moreover, the other branches contain work in progress, the separation of release branch and development, managing the stable code gets easy, and updates get shipped quickly.

How to Install Git or Update Git

On your preferable Linux Distro (we will be choosing Ubuntu), run the installation of Git using sudo code. For example, if you have Ubuntu 20, use the code mentioned below:

However, this code differs for different distributions, and one may require using a different package repository to get the latest version that is stable. After running this code, we see the option to choose from different Git versions. Choose the git latest version, which is 2.27.0.

However, if you’re unable to see the latest version of Git, you’ll be required to add the location to install. To achieve this, open ~/.profile file in the editor and add the following line where <path/to/git> is the location for Git to get installed:

To download the latest stable Git, visit the official website. The next step would be to click on the downloaded .dmg file and then double-click the .pkg icon through which you can run the installer to setup git on the system.

Following the steps mentioned above will help you install the new version of Git and remove the existing version. However, if you miss getting the latest Git version, add a Git install location to your path. For this, open your ~/.profile file in a text editor and add the following line in which <path/to/git> is the install location:

In Windows, download the full installer, available on the official Git download for Windows. You’ll also get a supported version of Perl on installing the package. Install Git and ensure that the installation takes place in the same location as your existing Git installation.

The following page will appear on the screen through which you have to make choices as per the requirements: 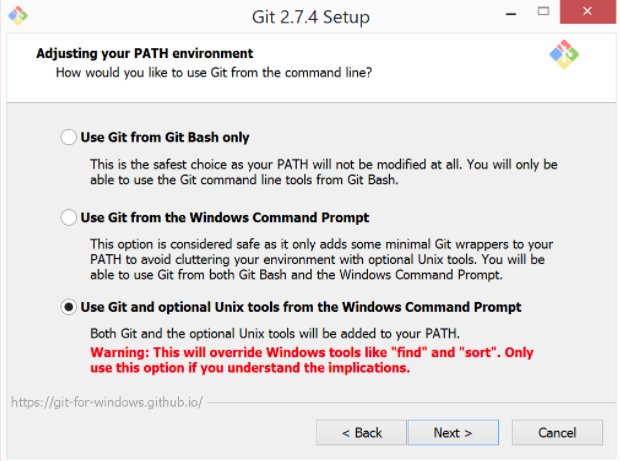 How to Check Git version

To check your current version of Git, run the following command in your terminal (for Linux or macOS) or command prompt (in Windows).

However, if you have no supported version of Git displayed on the screen, developers will need to update Git version or make a new installation.

How Git Helps in Different Areas of an Organization

Switching to Git modifies the development process of creating software. Moreover, this alteration has a direct impact on a lot of different workflows of your organization. Let’s break down the changes Git brings into different sectors of your business and analyze the potential and benefits:

It brings branched workflow among the developers and helps them dodge the interruption that occurs when more than one people work on source code. And unlike centralized version control systems, Git branches are less costly and easy to merge.

Being a distributed system, each developer can work on a copy whose changes are reflected in a single central repository. Moreover, all of these features, branches, and distributed development systems provide a faster release cycle.

The decrease in the time of development cycles makes it much easier to divide them into individual releases. It liberates the marketing team with more information to discuss, more content to promote with increased frequency.

Like marketing, frequent releases will bring more frequent customer feedback, resulting in faster updates. The branch workflow provides better flexibility when the user changes at times. Therefore, developers can manage two releases simultaneously around their dedicated branches until engineering has time to come back to it.

With the streamlined development cycle offered by Git, bug fixes are performed frequently before new releases that will automatically bring more ease to customer support. Developers just have to patch the problems, push them directly to production, deploy faster fixes, and get happier customers.

The UX/UI designers will get an entirely new user flow to check out new ways and designs through new branches that also give them a sandboxed environment to play. It liberates designers to see how their changes and edits will reflect the interface without breaking the existing functionality.

We hope this tutorial helped you install git and update git without any problems. A distributed version control like Git efficiently stores all the data regarding the past changes made in the source code. From offering advanced benefits like simultaneous development to work flexibility to developers and designers, Git is an important topic to know about in the world of technology, and you can easily install git on Windows 10.

Learn about installing and updating its version on operating systems like Linux, Windows, and macOS through the step-by-step guide mentioned above. If you’ve already installed Git, you can check its version by the steps given in the blog. Comment below if you liked this article or still have any questions.