Are you running out of RAM on your Ubuntu system? Have you considered adding swap space to the system? One of the easiest ways to avoid out-of-memory errors is to add some swap space to your server. This article will go through what is swap and how to add swap space on Ubuntu 16.04, 18.04, and 20.04 systems!

Are you running out of RAM on your Ubuntu system? Have you considered adding swap space to the system? One of the easiest ways to avoid out-of-memory errors is to add some swap space to your server. This article will go through what is swap and how to add swap space on Ubuntu 16.04, 18.04, and 20.04 systems!

What is a swap?

Swap is a specific area on the hard drive that has been designed to temporarily store data that can no longer be held in the RAM. When the RAM becomes full, inactive pages are moved from the RAM to the swap space.

This allows you to increase the amount of information that your Linux server can keep in its working “memory”. The speed will significantly decrease when written on the disk compared to the RAM, but it will provide the RAM to hold more in-use application data.

Having a swap space is a useful safety net when your system runs out of RAM. In general terms, a swap is a part of the hard disk that is used as the RAM. So let’s go ahead and set up the swap space on your Ubuntu server.

Note: Swap is recommended for system utilization in traditional spinning hard drives. Using swap on SSDs can cause hardware degradation over time. We do not recommend using swap on VPS servers or any other providers that utilize SSD storage.

Note that the following steps will be suitable in all the mentioned Ubuntu versions.

Step 1: Check the system for swap

Before starting creating the swap file, make sure that the system has any swap space enabled. It is possible to have multiple swap partitions, but generally, one should be enough.

Once the command is run, your system does not have any swap space available if you don’t get any output. If you get something shown in the picture below, you already have a swap enabled on your machine.

Step 2: Check if there is enough free space.

The user should have sudo privileges to activate swap. Make sure you have enough free space on your hard disk. You can do that by entering: 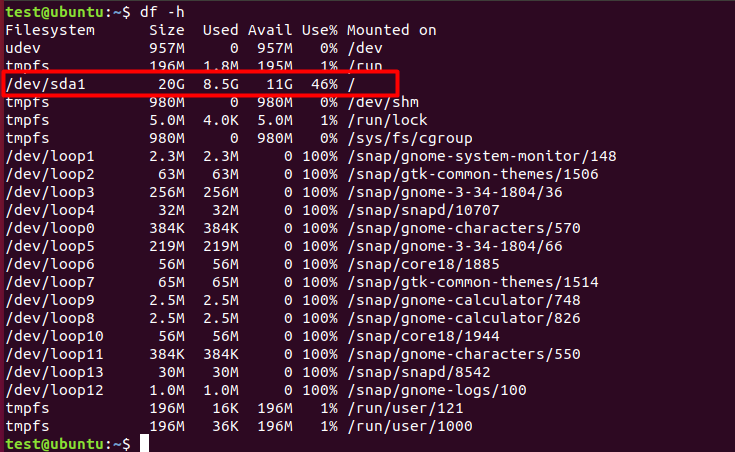 Now that we know there is enough space, we will create a 1G swap. If you want more swap space, you can replace the 1G with the size of the swap space needed.

This will create a 1 GB swap file. If fallocate is not installed or you get an error message, use the following command to create the swap file:

Only the root user should be able to write and read the swap file. This prevents standard users from being able to access the file, which can have significant security implications. You can set the correct permissions by typing in:

By using the mkswap utility, set up a Linux swap area on the file.

To activate the swap file use the following command:

Check if the swap is enabled, you will see a result similar to this:

Make the following changes in the /etc/fstab file to enable swap on system reboot using the nano command.

Copy and paste the following line on the editor(Best Linux Editors):

The default swappiness value is 60. While this value is OK for most Linux systems, for servers you should set a lower value.

The optimal swappiness value depends on the system workload and how the memory is being utilized. Adjust the parameters in small increments to find the optimal value.

Congratulations! You have successfully enabled the swap on your Ubuntu system. For it to come into effect, restart your system.

By following the steps mentioned above, you will have some breathing room when the RAM is under pressure. Swap space is incredibly useful in avoiding some of the most common out-of-memory problems.

If you come across any errors when attempting this tutorial, let us know in the comments below, and we will take immediate action and help you out.