There are various tools and methods in Linux operating systems to edit text files. Linux's most popular text editor tools are Vi, Nano, and VIM. Vi Linux is one of the most commonly used text editors in Linux because:

There are various tools and methods in Linux operating systems to edit text files. Linux's most popular text editor tools are Vi, Nano, and VIM. Vi Linux is one of the most commonly used text editors in Linux because:

This tutorial will guide you on how to use Vim Linux text editor. You can use it to create a new file, edit an existing file, and read the existing file.

You can create a new file and enter the environment using the following Vim command.

In the above vi command, we created a file called 1gbits.txt. If the file name you provide after this editor exists, it will open the file; otherwise, it will create a file with a specified name. The output of the above command will be like the below: 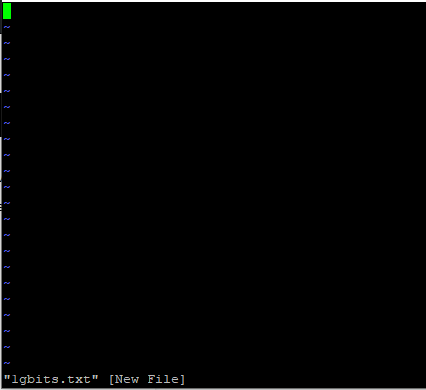 You will see the "~" character at the beginning of each line. This character shows a new line. If you face a line that is not started with the "~" character and has no content, you have used invisible characters such as Space, Tab, etc. Up to here, you can open a file with this editor. Now we will explain its basic concepts.

To work as a VI editor, you need to understand its operating modes. They can be divided into two main parts.

This mode allows you to do management tasks. In this mode, you can save changes, run commands, move the cursor, cut, copy, paste, and find and replace words. Any word you write in this mode will be interpreted as a command.

This mode is for inserting text into the file. Once you are in the Insert mode, any key would be taken as an input for the file you are currently working on. The default mode for Vi is command mode. You can switch to the Insert mode from the command mode by pressing 'i' on the keyboard. To return to the command mode and save the changes you've made, you need to press the Esc key. You will see "Insert" at the bottom of the editor when you are in Insert mode. See the following image: 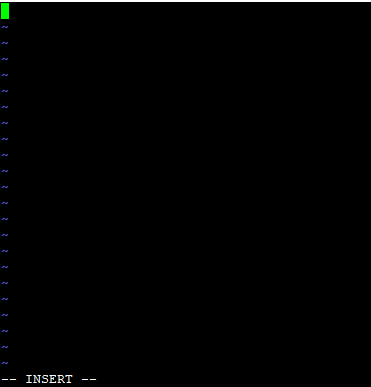 Note: If you do not know which mode you are in, you can press the ESC key twice, which will take you to Command mode.

To exit Vi, you must enter command mode using the ESC key and type: q. If you have made changes in the file and want to ignore them, you must use q! Command to exit vim without saving.

You can save your changes using the: w command.

To save a file with another name, you can specify a new file name after the w command as below:

Note: Press Enter key after save and exit commands.

Moving within a File

You need to be in the command mode to move in a file. The default keys for navigation are mentioned below:

Note: Commands are case-sensitive. You should use the right letter case.

You can specify times of command execution using a number before the command. For example, you can use the 2j command to move the cursor one line down from the current line.

You can use the below commands to move around in files as well:

$ move cursor to end of line

0 or | move cursor to the beginning of line

W moves cursor to next word

b move cursor one word to left

( Move cursor to the beginning of current sentence

} Move cursor to the beginning of the next paragraph

{ Move the cursor to the beginning of the current paragraph

G Moves the cursor to the end of the file

1G Moves the cursor to the first line of the file

nG Moves the cursor to the nth line

.: Moves the cursor to line N.

H Move cursor to the top of page

M Moves the cursor to the middle of the screen

L Moves the cursor to the bottom of the page

n Moves to the end of the blank line delimited word

Fc moves cursor back to c

You can also use the below Vim commands in Linux to edit the file:

CTRL + b Move backwards one fullscreen

CTRL + e moves the screen up one line

CTRL + y Moves the screen down one line

Use the following commands to delete lines and words in a file:

You can copy lines and words and paste them somewhere else using the below commands:

There are advanced Vi commands in Linux that make editing easier and allow for the effective use of vi:

Congratulations! You have learned how to use the VI text editor.

So this is how you can easily use the Vi Linux text editor to create and edit your text files in Linux without having any troubles. As we have mentioned earlier, Vi text editor is the most commonly used text editor. That's why we have explained everything about Vi text editor, which can help you edit files easily.  If you are facing any problems with the installation, feel free to comment here. We will help you to solve the issue.