How to monitor and analyze network traffic on Linux Servers

Why should you monitor network traffic on your Linux server? As your business expands, the number of requests to your site will increase. This results in creating an influx of network traffic to the website. If no preventive actions are taken immediately, you might face some serious repercussions.

To avoid any malfunctions and ensure the overall quality, consider monitoring the network performance. This continuous monitoring approach will allow you to check why the network is running slow and find the issue’s culprit.

Several monitoring tools can be used in all Linux distributions to check the bandwidth usage and other network diagnostics.

Linux offers you some commands to install these tools to monitor traffic that gives you information about which process is overusing the network bandwidth.

Not all tools are equal, and each tool offers different features. Different tools provide a different process of generating a traffic report for analysis purposes.

In this tutorial, we will go through some of the main tools that can be used to monitor network traffic on Linux Servers.

The below list is sorted as per their features:

Based on Overall Bandwidth

It is a command-line tool that helps you to monitor the incoming and outgoing traffic individually. It represents the traffic in a graphical form with an adjustable scale. This tool is straightforward to implement and analyze.

However, it does not come with multiple options. It displays the total bandwidth usage without going into the process level. In some other tools, you can find the details of how much bandwidth is consumed by each process. However, for a general overlook of bandwidth, this tool is sufficient.

To install nload use the following commands depending on the Linux distribution you are using.

Note: Don’t forget to enter ‘nload’ after the installation is completed. By using the arrow keys, you can check between the network interfaces. To close the output, press ‘q’. 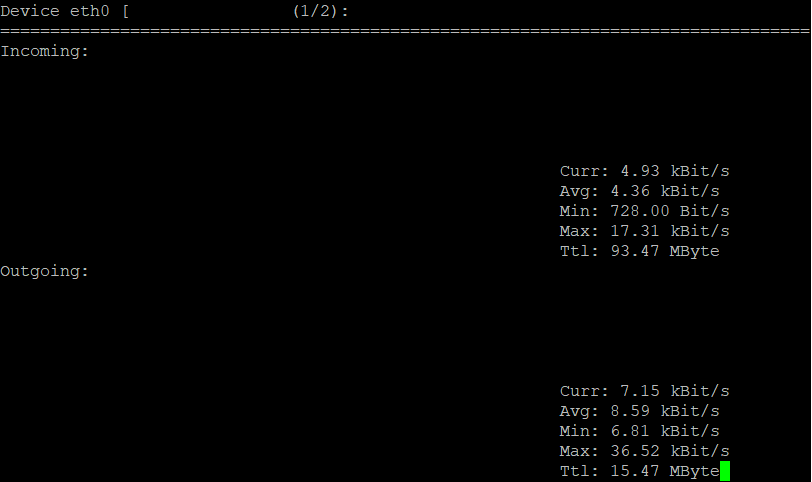 This tool works almost like the Nload tool that displays the traffic load within the system’s network interface. The output of the bmon shows the graph that comes with packet-level details of the traffic.

With the help of bmon, you can produce reports in HTML format. You can also refer to a man page for more details and bmon options. To learn more about using basic Linux commands, you can have a look at our previous article.

Bmon command is available for distributions like Ubuntu, Debian, and Fedora from default repositories, while CentOS users will use repoforge as it is not available in Epel repository. 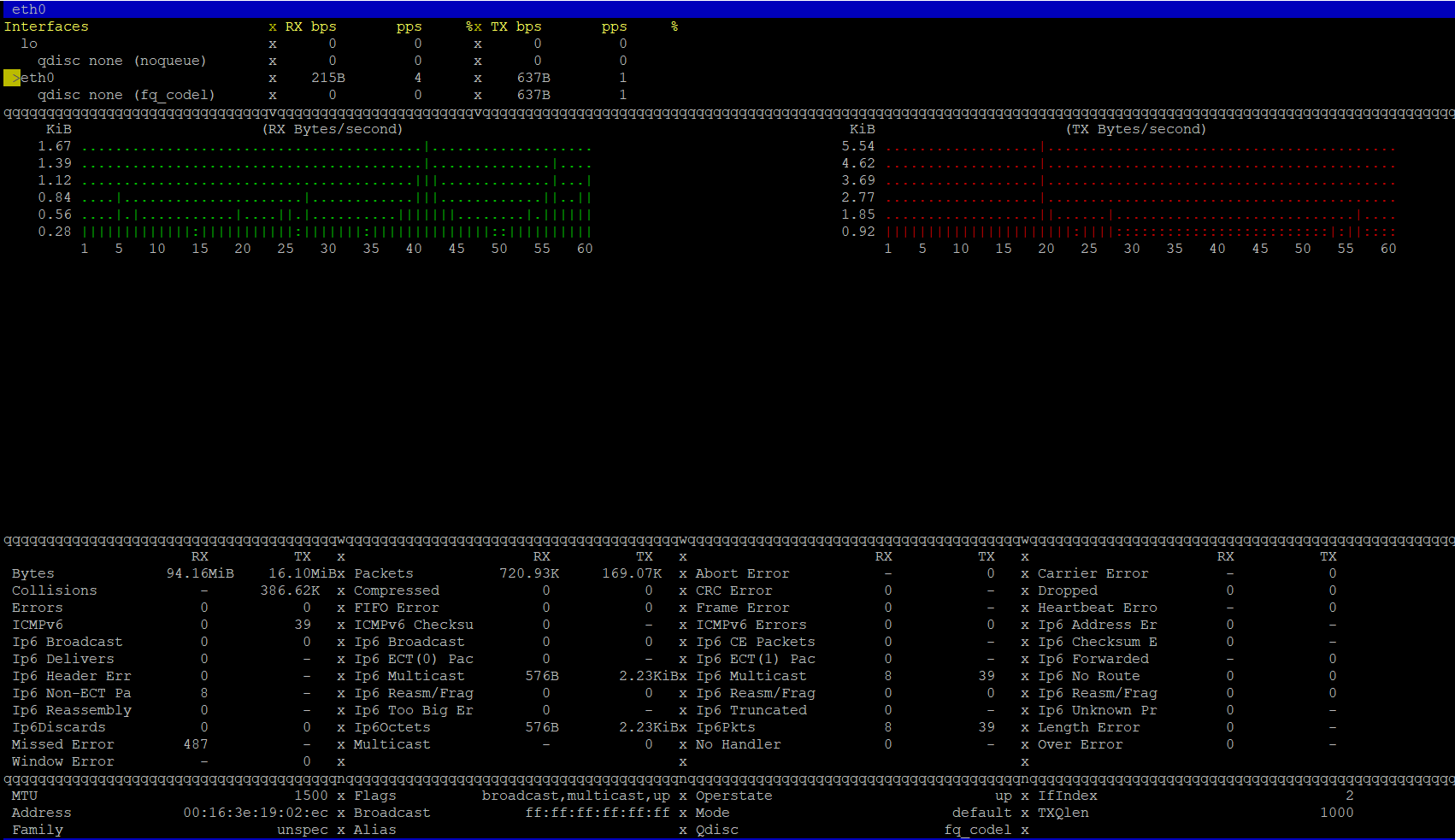 Note: By using the arrow keys, you can check between the network interfaces. To close the output, press ‘q’. Press’ d’ to enable detailed statistics and press ‘i’ to allow additional information.

This is another tool that monitors the network load by displaying the device statistics and the ASCII graph. This tool can generate three types of graphs that can be managed using different options with the slurm command.

l - Same as a split graph, but larger. Some text omitted.

But it will not specify any other information to expect the network load. Install slurm tool with the help of the below commands: 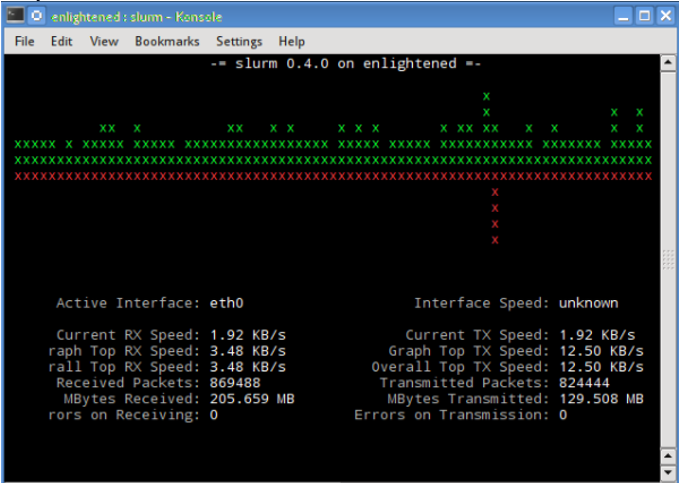 This is another monitoring tool that allows you to track real-time network loads. The report generated as the output of the command will display the summary of the speed at which the data flows in and out about all the available network interfaces present on the system.

Use the below commands to install bwn-ng:

Note: After installation, don’t forget to run the program. To close the output, press ‘q’. Press ‘h’ to open help which will show all the key bindings used in bwm-ng.

This is the most straightforward command-line tool that displays the traffic volume through a user-friendly network interface within the system. It just shows the traffic stats, which get updated in real-time.

While cbm is running, you can control its behaviour with the following keys:

Use the below commands to install and run cbm: 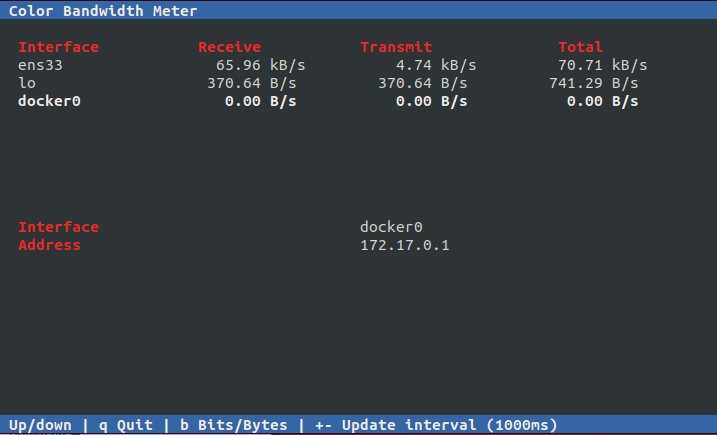 This is a simple traffic monitoring tool that displays a clean and clear graph displaying the network traffic flowing in and out through all the system’s network interfaces. 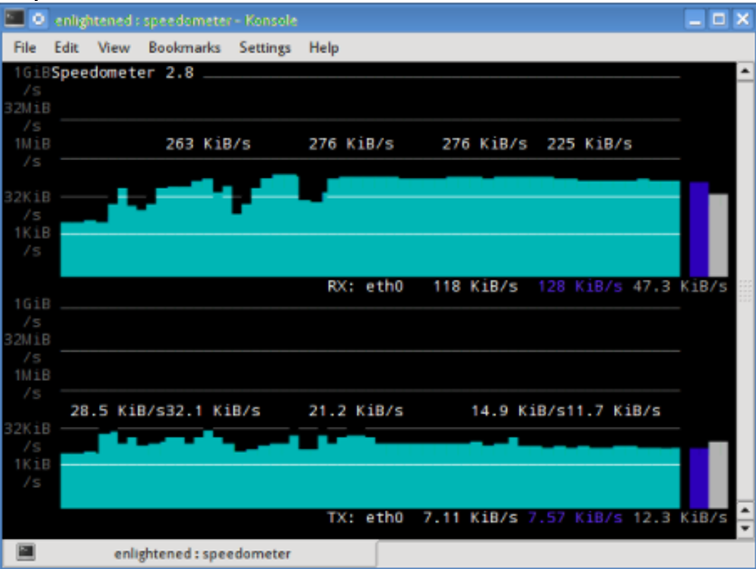 This network monitoring tool displays a short report indicating the current traffic load and the bytes being transferred after the process.

You can download Netload using the below command (Ubuntu or Debian)- 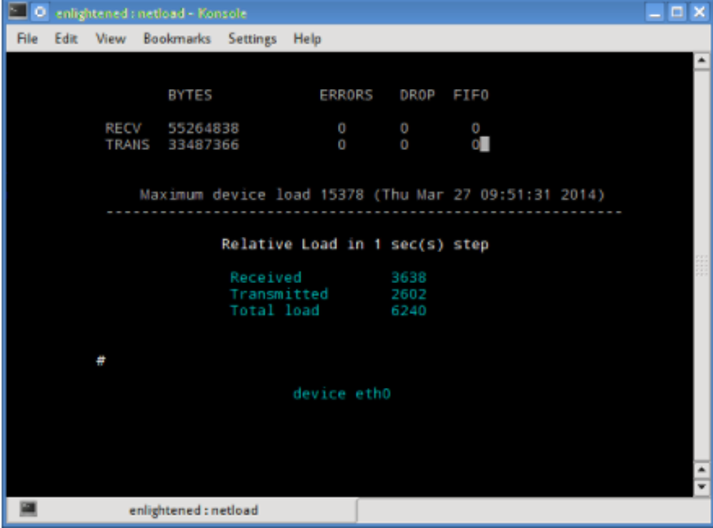 This tool is different from the other network monitoring tools as it runs a service/daemon in the background. This will record the data size that is being transferred all the time. Also, you can generate a report with a history of network usage.

Install vnstat using the below commands.

Check the vnstat running status using the below command.

If you do not provide any option for running the vnstat command, it will display all the data transfer since the daemon’s start. 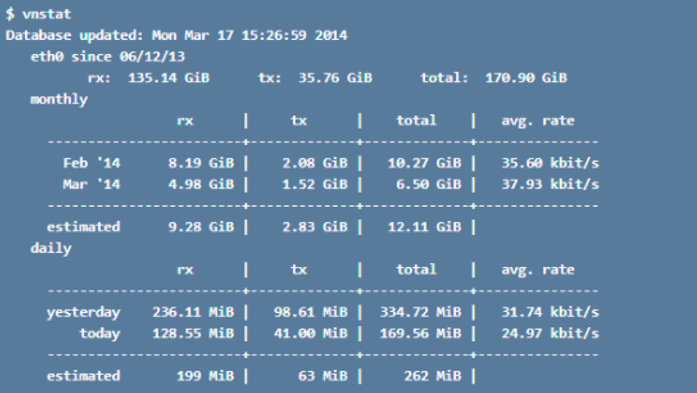 To display the real-time bandwidth usage, use the “-l” option with the vnstat command to display the total bandwidth used by the incoming and outgoing traffic without any additional information.

This tool will provide the network bandwidth report in the batch-style mode. The result is displayed in an easy format to understand and log.

Install the ifstat using the below commands.

This tool is written in Python, allowing you to monitor different system stats and create a report in the batch-style mode. It can also log the data to a CSV file format. Use the below command to install dstat on Ubuntu or Debian.

This traffic monitoring tool also works the same as the dstat, which allows you to gather the system statistics regarding the different system resources it uses like CPU, memory, etc. You can use the below commands to install collectl.

Tools Based on Bandwidth Per Socket Connection

iftop is a traffic monitoring tool that allows you to measure the data flow through the socket connections. It works a bit differently from the nload. iftop comes with the pcap library that captures the packets movement to find the total used bandwidth.

It allows you to report an individual connection’s bandwidth without mentioning the process within that connection. iftop will enable you to filter the traffic usage within the selected connections.

Use the below commands to install.

Note: Due to security reasons, the IP addresses are removed from the above picture. When you test it, you will see the complete IP address.

It is an interactive IP LAN monitor displaying individual connections and the data transfer flow between the hosts. Use the below commands to install.

To start the IP traffic monitor for eth0 interface type the following command. Pass the -i all option for all interfaces: 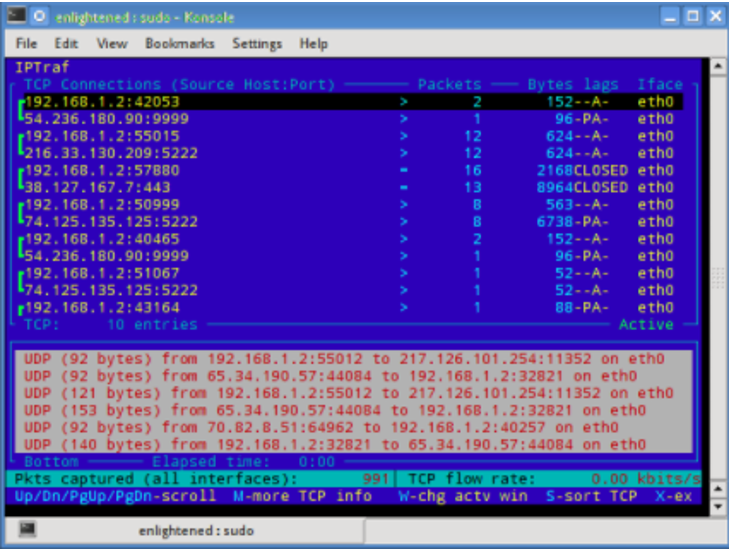 This tool is similar to the iftop tool, which also provides a pcap library that captures the packet’s movement to find the total used bandwidth within each connection. To install, use the below commands accordingly. 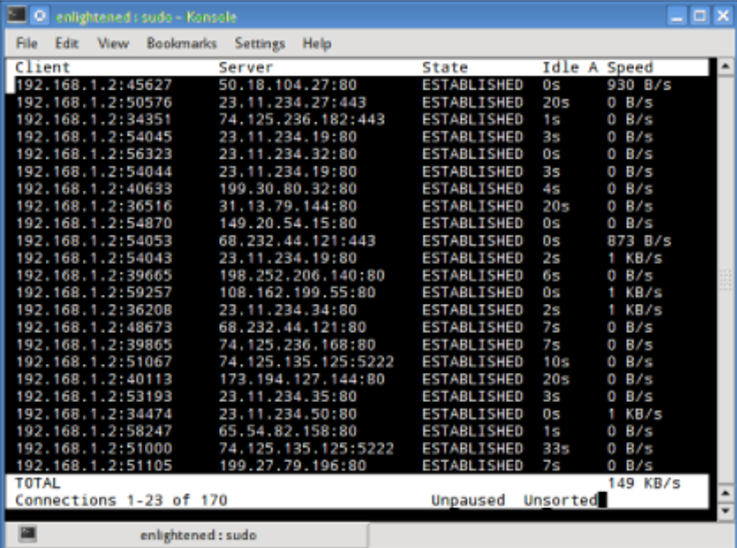 This tool displays the real-time and active connections and the data speed with which the data is flowing. It specifies what type of connection is used for data transfer. Use the below commands to install on Ubuntu or Debian distros. 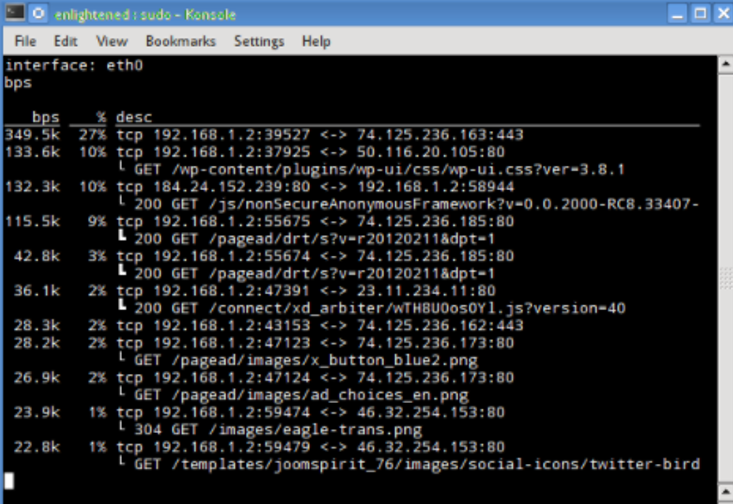 Install the tool using the below commands on Debian or Ubuntu. 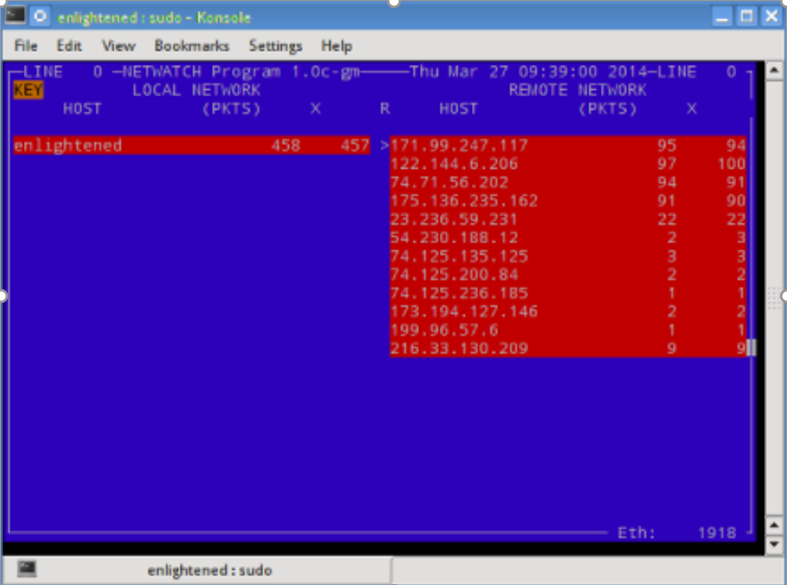 This tool works like netwatch and pkstat, which displays the current connection’s transfer report. It allows you to monitor only TCP connections within the network. Install the tool using the below command (Debian or Ubuntu). 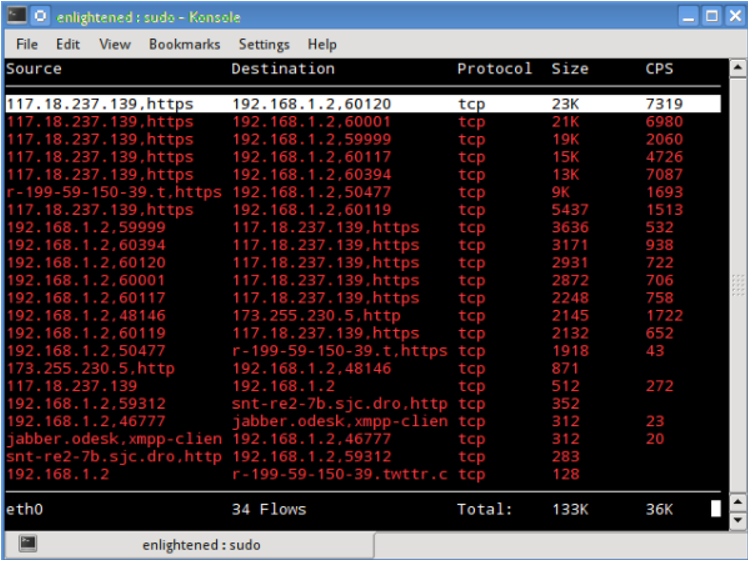 Tools Based on Bandwidth Per Process

It is a small net top tool that displays the bandwidth’s processes with the most intensive process on the top using the most bandwidth. Install the tool using the below command. 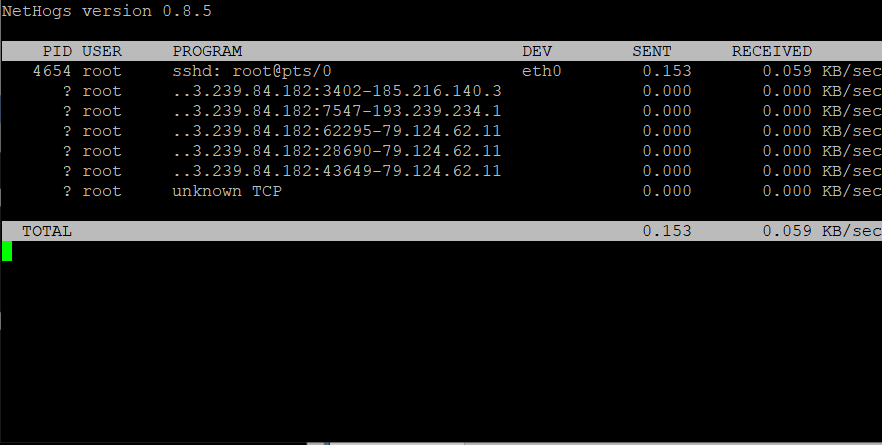 The commands mentioned above will allow you to get the traffic information in different ways, and you can use any of them which suits your purpose. You can run these commands on your Linux server; log in to the remote server over SSH.

For a Linux administrator, these are prevalent tools. If any of the commands do not work or you encounter an error, don’t hesitate to ask from the comments below. Let us know your feedback and any other network monitoring tools that you use in the comments too.

What is the Kill command?

How to install XRDP on Ubuntu 20

How to enable and disable the PIN in Windows

How to install xrdp on CentOS 7